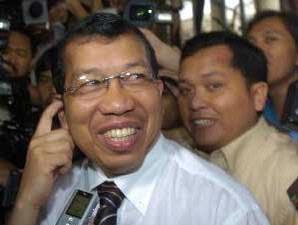 Hamid Awaludin was Indonesian minister of law and human rights from 2004-2007 when Jusuf Kalla was vice president, and was Indonesian ambassador to Russia and Belarus from 2008-2011.

Jusuf Kalla considers both Anwar and Najib as good friends. He wanted to help because they were competing fiercely with one another. That is how he saw this.

2. Anwar claims there were several "preconditions" in the agreement eg. free elections, fair media, etc. Can you outline any preconditions?

I am very sure that there were no preconditions discussed between Jusuf Kalla and Anwar. For me, a deal is a deal. And there was a deal that both parties – Anwar and Najib – agreed to.

Some people always try and find a loophole after the event, or an excuse not to deliver on their promise. Some people are different in character to others.

3. Anwar now claims PM Najib didn't sign the agreement and it was therefore not valid. Jusuf Kalla says the PM did give his verbal agreement and therefore the deal was agreed by both parties, and was valid. Is Anwar correct or is Jusuf Kalla?

Anwar knew that Najib did not sign the agreement. Najib had very reasonable, political reasons for not signing the agreement and Anwar understood and accepted it.

But Najib gave his word that he would honour the agreement. He consented to the agreement. Basic morality teaches us that a man’s word is more important than his signature. And deeds are more important than any declaration. Najib delivered on his promise. He called for national reconciliation during his election result acceptance speech. Najib’s deeds matched his word.

I am very sure that nothing jeopardized the agreement in the run up to the election or on Election Day. The agreement still stood. Things changed after Najib was declared the winner. Even the day after Najib’s victory, I was personally optimistic that a deal is deal, and both sides would abide by the deal. But Anwar broke the deal. Perhaps he was unable to manage his followers, especially because the DAP had won more seats than Anwar’s own party. Anwar found himself in a difficult position. But a leader must lead, not be led.

5. Do you and Jusuf Kalla feel Anwar broke the deal? If so, how?

I feel that Anwar still does not accept political reality. Perhaps he has things he will not say because he doesn’t want to hurt people. I don’t know.

6. Do you feel Anwar was/is sincere in wanting national reconciliation in Malaysia?

I believed that Anwar had sincerity and I still hope he has.

7. Why do you think Anwar is behaving in the manner in which he is – denying the agreement, refusing to cede defeat and organising protests across Malaysia?

From the beginning, Anwar convinced himself that he would win the election. He had struggled for so long and he thought that this was the end of the struggle. He thought he would win the battle and defeat Barisan Nasional. His belief was strengthened by opinion polls that were often in his favour. And each rally Anwar held during the campaign attracted massive crowds. But in the end, the people’s choice is the ultimate factor in a democracy.

Anwar believed he would win the election but he was afraid Najib would resist and not hand over power. So Anwar wanted insurance against this scenario. That is why he came up with the idea of the deal.