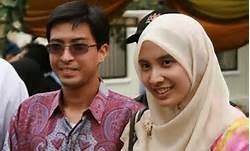 The hot debate in cyberspace over the petition filed by PKR vice-president Nurul Izzah Anwar to annul her marriage reflects the reality that public figures cannot escape the glare of attention.
The 33-year-old Lembah Pantai MP had sought to end her marriage to Raja Ahmad Shahrir Iskandar, 35, via a fasakh petition at the lower Syariah Court in Jalan Duta in December.
Vanitha Nadaraj, a news portal editor, took to Facebook to explain she could not accept the arguments for Nurul Izzah to be left alone and not have her privacy encroached upon.


“News is news. And if that means reporting about an application for divorce by one of the sweetest public figures around, so be it,” she said.
Netizen Napsiah Wan Salleh said: “Public figures can’t pick and choose the type of publicity they want.”
Kamazuki Junuh said having one’s personal problems in the limelight was part and parcel of being a public figure.
Cantapus Krishnan said the move to file for a marriage annulment was news material, adding that nothing could be secretive once it has been taken to court.
Adexa Moda said the public was rightly curious about its elected representatives.
“If they can’t manage their family affairs, how are they going to manage a Constitutional affair?
“Politicians deserve their own space, much as we like to know what the crux of the matter is,” said Wahre Herze.
“Divorce is divorce, politics is politics. Don’t try to mix them both as it is totally a different thing from each other,” said netizen Sean Hong.
Zaiton Hussin said family problems should firmly remain within personal territory.
Ismail Md Yussof urged the public to “let them be”, while Alex Asing called upon others to respect their privacy.
The debate continued on Twitter with tweeter @MustaainWahab saying: “What she does now or in coming future will be subjected to public scrutiny.”
@sha_116 felt that public figures belong to the public, while @Homeguard1960 questioned her ability as a wakil rakyat.
@RMFShahnan said as long as the publicity was legal, it was all fair game.
@TunkuHarun wrote: Everyone deserves privacy, including public figures.
@devilfluffy argued Nurul Izzah “deserves privacy on such personal issues” while @ChowPong felt her decision to divorce should be “celebrated” instead of being cast in a negative light.
Artikel: Ahad, Januari 26, 2014