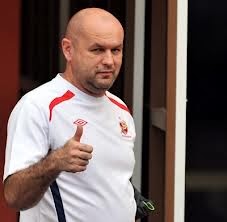 The Croatian has signed on a 1+1 year contract with the Super League side and will be tasked with assisting head coach Cesar Jimenez to manage the team.

The 42-year-old Hodak’s vast experience in the M-League is expected to be a major boost to JDT who are dead set on ending their title drought this season.

Hodak who started his career in the M-League as UPB-MyTeam coach from 2006-2009, reckons that he can form a good partnership with Jimenez.

“It is very simple, Cesar (Jimenez) will be the team coach, while I’m the team manager and both of us will work together to win titles with the team,” said Hodak, on Tuesday.

“I know the players and the teams here very well and for Cesar it’s a new experience to coach in this region plus he was having some communication problems with local players.”

“We have been given the target of winning at least one trophy this season and I believe we have the quality to achieve it.”
Artikel: Rabu, Februari 26, 2014