Home » Wanita » Clothes So Tight, I Could Hardly Breathe

Clothes So Tight, I Could Hardly Breathe 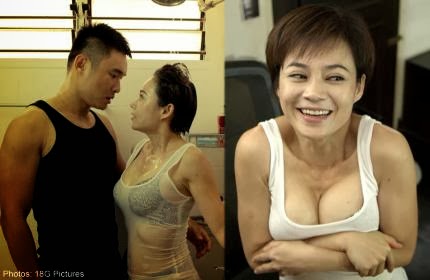 Rubbers, a collection of three short films about sex, love, seduction and punishment, is in post-production.

This is Yeo's first role after she gave birth to her daughter in August 2012.

Speaking to The New Paper over the phone from Malaysia, the 37-year-old actress said: "It's one of my most daring roles to date. I had to wear skimpy clothes and flaunt my body in the movie.

"I never thought my body could look that hot and spectacular."

Yeo, who shot the scenes for the movie last July, had to squeeze into a body-hugging tank top and short hot pants for her role.

"It was a very simple yet revealing outfit. The clothes were so tight I could hardly breathe while filming," she said.

"When I appeared on set in the outfit, I felt a little shy.

"The scene I like most was the one of me and Julian in the toilet. It was a very cramped space. We were standing so close to each other and my body was all wet. It was a very sexy and seductive scene."

Motherhood, she said, helped her achieve a more voluptuous figure for the role. Her chest increased by two cup sizes after giving birth.

She said: "I am a breastfeeding mum. So my boob size increased by quite a lot."

She had worked with director Han on his 2008 feature film 18 Grams of Love.

Yeo said she took on such a provocative role right after becoming a first-time mother to help her old friend Han.