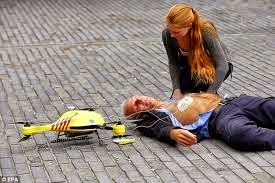 Drones are already being used in war zones and to spy on people.

Now an enterprising young engineer has developed a flying robot that could one day save thousands of lives.

Alec Momont's 'ambulance drone' flies at speeds of up to 100 kilometres per hour, carries its own defibrillator and can reach people much more quickly than a standard emergency vehicle.

"Around 800,000 people suffer a cardiac arrest in the European Union every year and only 8% survive," said Mr Momont, 23, a graduate student at Delft University of Technology in the Netherlands.

"The main reason for this is the relatively long response time of emergency services of around 10 minutes, while brain death and fatalities occur with four to six minutes.

"The ambulance drone can get a defibrillator to a patient within a 12 square kilometre zone within a minute, increasing the chance of survival from 8%to 80%."

The drone tracks emergency mobile calls and uses GPS to navigate.Once at the patient's location, an operator can watch and instruct those helping the victim by using an on-board camera connected to a control room.

Mr Momont said he hoped to have an emergency drone network operating across Holland within the next five years, but added legal issues regarding the use of drones had to be resolved first.

He added he wanted his invention to become a "flying medical toolbox" also able to carry an oxygen mask and medicine such as insulin.
Artikel: Khamis, November 13, 2014