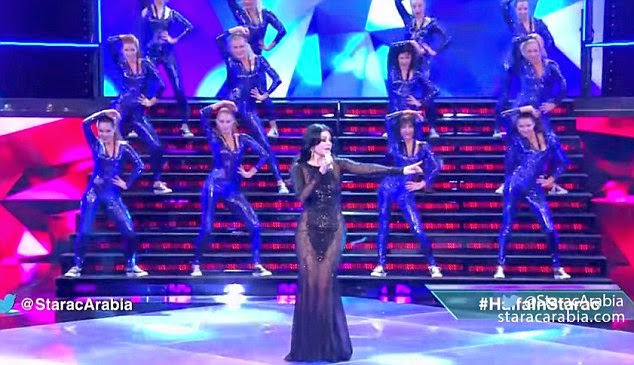 A Lebanese pop star caused outrage in the Arab world by wearing a revealing dress during a talent show performance condemned by many as 'scandalous'.

More than two million people watched the seductive performance and many women took to social media to criticise Wehbe for her racy choice of outfit.

Commenting on footage of the performance on social media, many wrote 'scandalous' with one YouTube user writing: 'Art has limits and you, Haifa, have crossed the line'.

Wehbe regularly causes a stir with her revealing outfits - especially among the Arab world - where many women uphold strict conservative traditions of dress.

Most of the negative reactions on social media came from women in Egypt, Jordan and Saudi Arabia.
In Saudi Arabia, women are required to cover up from head to toe, often with only their eyes exposed.

One Egyptian woman tweeted: 'It is true that we got used to her wearing scandalous clothes but not to this extent…it was a shock for the viewers.'