Home » Dunia » Hiburan » Bollywood Star Was Slapped By A Man

Bollywood Star Was Slapped By A Man 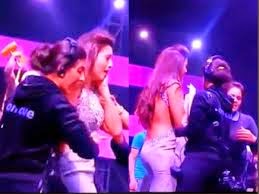 Bollywood star Gauahar Khan was slapped by a man in the audience at a TV competition she was presenting after he took offence at the clothes she was wearing.

Akil Malik, 24, reacted after seeing the model wearing a short dress while she hosted the grande finale of singing competition Raw Star at Film City in Goregaon, Mumbai.

The 24-year-old then got out of his seat and threatened to assault her live on television.

Malik told the Mumbai police: 'Being a Muslim woman, she should not have worn such a short dress.'

According to The Independent Malik was arrested and charged with molestation under Section 354 of the Indian Penal Code.

Exactly how Malik managed to get close to Khan remains a mystery as security during the song competition was extremely tight.

Despite crowds of 2,500 and 250 guards being present in the studio, Malik was about to break through a cordon and confront Khan as she was being escorted from the venue.