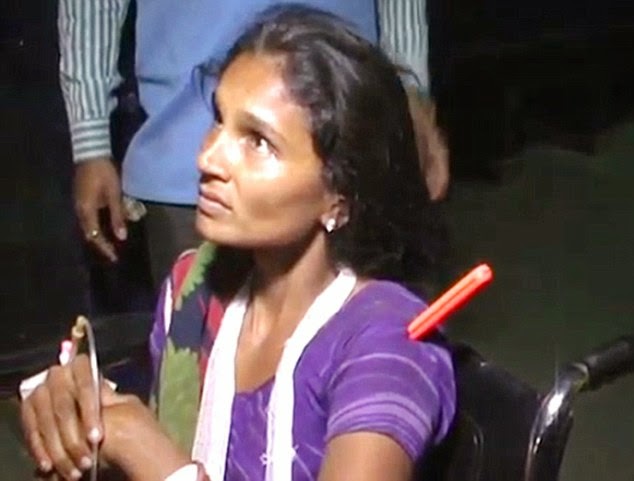 A shocked housewife was left with a five inch knife blade embedded in her shoulder after her husband flew into a violent rage and stabbed her because she was teasing him about his cooking.

Ganpat Vaz, 40, from the city of Surat in Western India`s Gujarat State had been preparing a plate of fried vegetables when he and wife Suman, 38, began joking about his culinary abilities.

But Vaz suddenly flipped after his wife made a passing remark about his manhood and a cucumber that she was chopping.

Neighbour Kadri Ravikiran, 35, said: 'I heard a knocking on my front door and when I answered I couldn't believe my eyes.

'Suman was standing there with a knife sticking out of the top of her arm.

'At first I thought it was some sort of joke.

'But she was very pale and clearly in shock and when she told me what I had happened I immediately phoned an ambulance.'

A hospital spokesman said: 'Fortunately, the knife didn't damage any vital tendons or arteries and she sensibly did not try and remove the knife herself.

'She is now recovering nicely.'

Stunned Suman said: 'I can't believe he did this. He's never been violent before and we often joke about how useless he is in the kitchen.

'I just can't understand what made him flip over such a harmless remark.

Vaz was eventually tracked down to a local park where he was arrested for assault. But police said he will still face charges and could end up ending two years in jail.

A spokesman said: 'He has pleaded guilty and has apologised.'