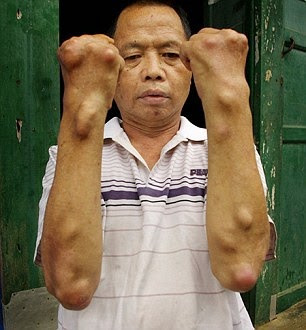 Chinese villagers are suffering unsightly, painful and swellings all over their bodies as a result of heavy metal poisoning from soil and water.

Villagers in Sahecun village, in southern China, are suffering severe health problems – including aching bones - due to pollution caused by a lead mine that closed more than a decade ago.

Government tests confirmed soaring rates of poisonous metals in the soil and water nine years ago.

But a clean-up operation ordered at the time stopped shortly after, so the area has remained contaminated for years.

One of the villagers, Huang Guiqiang, 58, can no longer work due to the swellings. 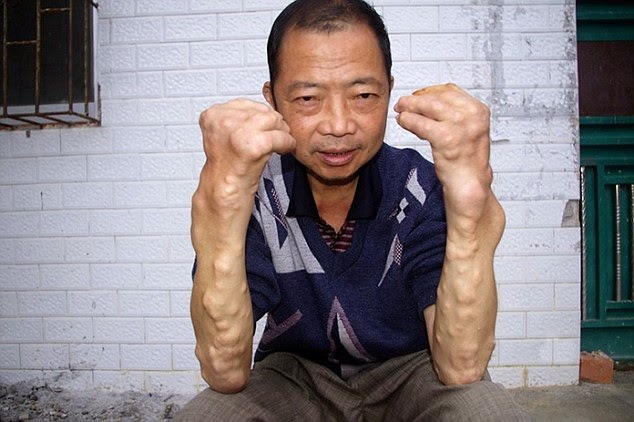 He said: 'I noticed symptoms at the turn of the century, when I was feeling weak and listless and was no longer able to work.

'The lumps over my body are incredibly painful, and interspersed occasionally with periods where I can't feel anything at all in my body.'

He said he had been helped with the cost of visiting hospital in the nearby city, where he was diagnosed as suffering from severe cadmium poisoning.

Cadmium is toxic metal, which has a destructive impact on most of the body's systems if high levels are ingested.

Since his diagnosis, Huang Guiqiang said little has been done to help treat the condition.

The villagers still breed fish in ponds, knowing that the fish will grow up contaminated. 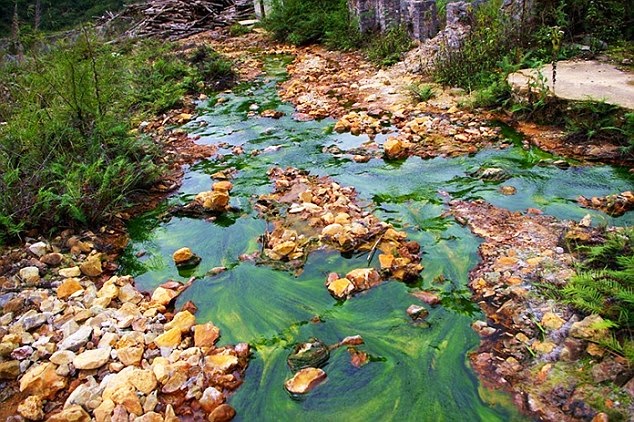 Huang Guiqiang said: 'What choice do we have. If we don't breed fish, we won't have anything else to eat.'

Guangxi Environment and Geology Research Center found the cadmium content in water in the area was 17.4 times higher than the national standard, CRI English reports.

And the metal content in the region's soil was even higher – at 29.1 times higher than the national standard, the investigation, which was carried out in 2000, found.

Guiqiang's second oldest brother Huang Fuqiang, 61, also began experiencing similar symptoms around the same time, growing a large number of unexplained lumps on his hands and feet, which left him confined to his bed.

The pair's oldest brother, Huang Jinqiang, who was also a sufferer, died last year, having been bedridden by the disease for 10 years.

Others in the village have been diagnosed with ostealgia - a medical condition that results in acute pain in the bones, CRI English reports.

In the 1950s, villagers were given well-paid jobs when Government officials authorised the mining of zinc and lead in the region.