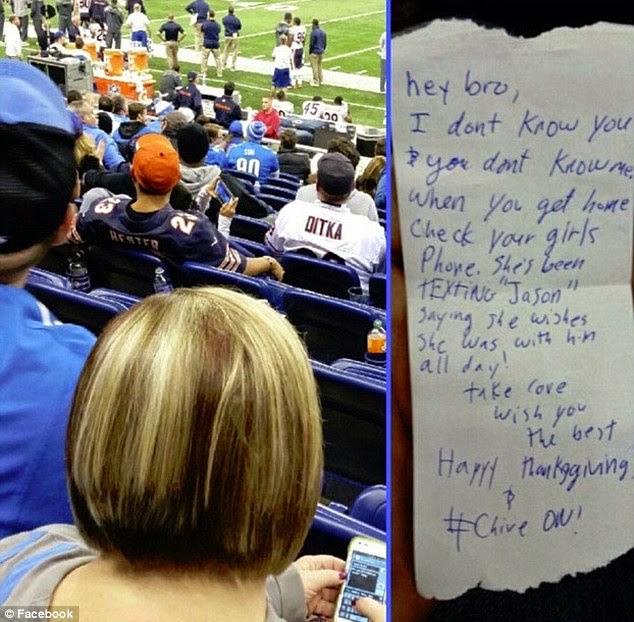 He was just trying to watch the game, but instead he was dragged into a random couple's relationship drama.

A man named 'Lye' has written about his experiences confronting a stranger at a Detroit Lions football game, after he claims he saw the man's very pregnant girlfriend 'romantically texting' another man throughout the match.

At the end of the game, Lye handed the man a note revealing the alleged adulterous text messages, and later posted a picture of the note and the pair he claimed to be the couple to Facebook.

Those images have since gone viral and are now sparking a heated debate online about whether it's appropriate to wade into a complete stranger's relationship.

According to Lye's post on Facebook, he was attending a Detroit Lions game last month when he was seated behind a couple who appeared to be dating. 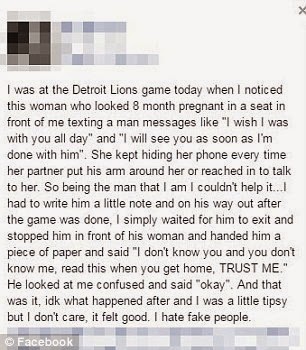 Throughout the game, he claims he saw the woman casually texting a contact in her phone named 'Jason' apparently making comments like 'I wish I was with you all day' and 'I will see you as soon as I am done with him'.

Meanwhile,he claims the woman kept the phone screen tilted out of eyesight of the man seated next to her, and would even shut it off and put it away when he engaged her in conversation.

Feeling sympathetic for the man seated in front of him, who he believes was being cheated on, Lye got up near the end of the game to find a pen and piece of paper to write the stranger a note.

When the man got up to leave, Lye handed the piece of paper to him and said to read it when he got home.

Lye later took to Facebook to post an image of the note and the woman who was was seated in front of him, showing the back of her head with her phone out, writing a text.