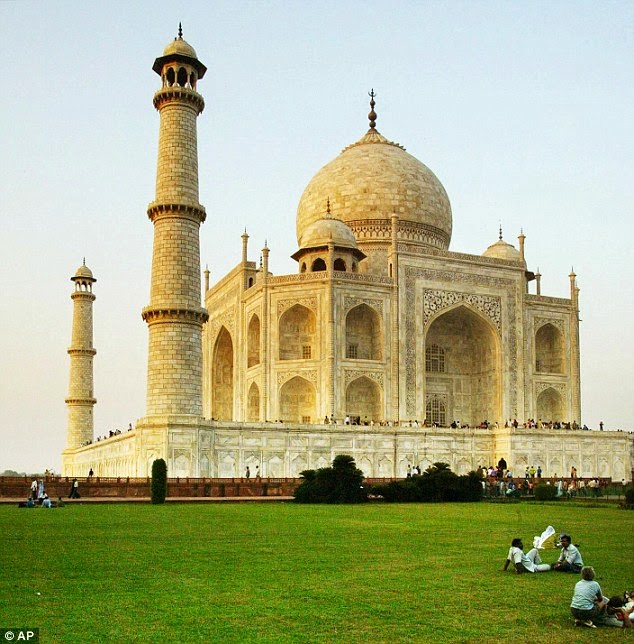 It is an iconic landmark that attracts millions of visitors every year, but a particularly sticky form of air pollution is turning the gleaming marble domes of the Taj Mahal brown.

Scientists have found that tiny dust particles and soot from the burning of dung, wood and rubbish nearby are sticking to the surface of the famous building.

Once on the marble surface of the Taj Mahal, these particles absorb ultraviolet light, giving its normally white domes a dirty brown shade.

Researchers found that these particles are particularly troublesome as they are insoluble in water and so cannot be easily washed off.

Instead workers currently cover the outside of the domes with a layer of clay every few years before peeling it off to restore the white colour of the building.

But now scientists hope their findings will help those caring for the 460 year old mausoleum in Agra, India, to develop new methods for cleaning the building.

Professor Mike Bergin, an environmental engineer at the Georgia Institute of Technology in Atlanta who led the study, said: 'The particles are super small and stick to the surface very well.

'They can not be easily removed by wiping the surfaces off or attempting to power wash the surfaces with water. Also the particles we are talking about do not dissolve in water. 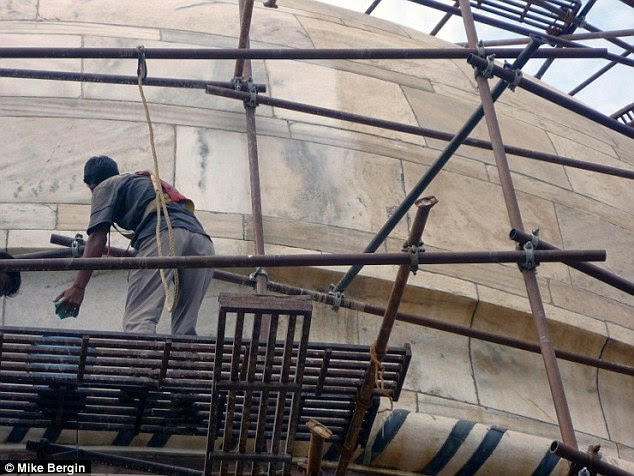 'There is some concern regarding the long-term impact of the cleanings on the Taj domes. The only real way to stop the Taj from discoloration is to find the sources of the particles and figure out a way to substantially decrease emissions.'

Professor Bergin first became interested in what was changing the colour of the Taj Mahal after seeing workers applying 'facial masks' of clay to the domes of the building.

Built between 1632 and 1653 by the Mughal emperor Shah Jahan in memory of his third wife Mumtaz Mahal, it was constructed from white marble excavated 230 miles away in Makrana, Rajasthan while some of the outlying buildings were built from red sandstone.

Acid rain, sulphurous gas in the air and oxidizing fog have all been blamed for the changing colour of the marble over the years.

In 1983 the Taj Mahal was named a UNESCO World Heritage Site and the Indian Government has set up a 4,000 square mile zone around the monument where strict restrictions on industrial emissions are in place.

However, the building has continued to discolour, suggesting something else was the blame.