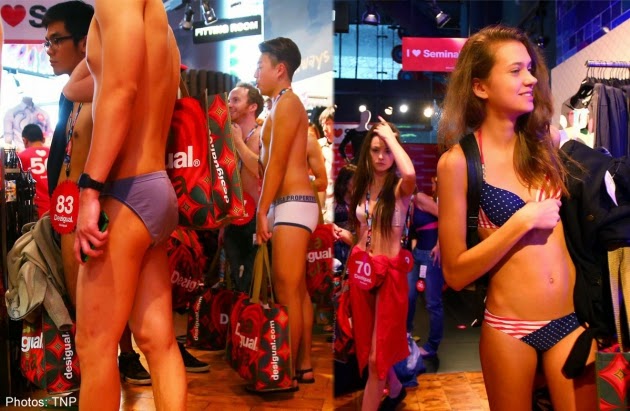 They arrived, ready to bare most of their bodies.

I went, ready to envy and enjoy the eye-candy of bikini babes and hunks sporting six-packs.

But the event, organised to create buzz for the opening of Desigual's flagship store in Orchard Central, was more disappointing - at least to gawkers - than daring.

The shop's representatives let the bargain-hunters, almost 100 of them, cover up with kimono-inspired Desigual bathrobes while waiting.

Given the event's daring tagline "Come in your swimwear, we got you covered", I expected the party, which started at 9am, to be similar to those the chain had held in Europe: A group of people unafraid to bare skin.

The idea was created to kick-start the store's sales promotion by giving Desigual fans a chance to bag a free outfit.

The first 100 people to queue outside in their swimwear would be given an hour to pick an outfit in which they would leave with for free.

But organisers from the Spanish high-street fashion label decided against giving Singaporeans the same experience that bargain-hunters had in Europe because of concerns over Singapore's conservative culture. 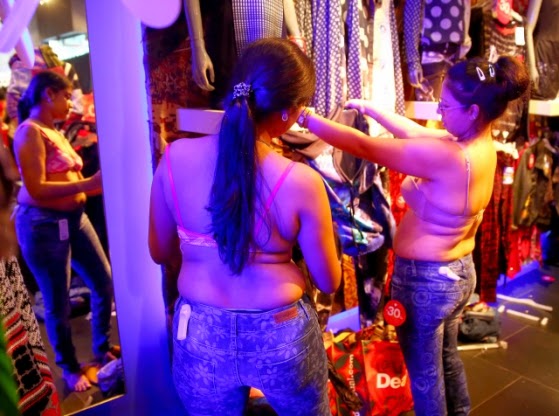 Ms Andrea Figueras, 32, a Spanish representative who is marketing and communications manager for Desigual Asia, said: "The kimono-inspired Desigual bathrobes were provided to participants in the brand's effort to adapt and respect the more conservative Asian culture and religion."

She also confirmed with The New Paper that they were "advised by authorities to cover participants in bathrobes when in public".

It is not known who issued the advisory.

TNP understands that before obtaining a permit for the event, organisers had to comply with regulations that ensured that the experience, for as long as it lasted, would remain private.

The store's floor-to-ceiling glass windows at the front and the back had to be covered with a black curtain to prevent others from gawking at the swimsuit-clad bargain-seekers.