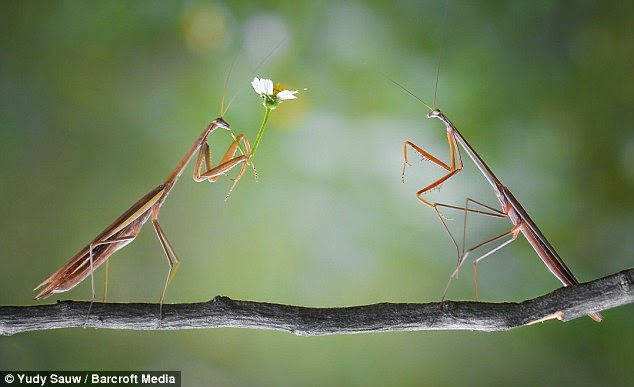 It's no secret that mating works a little differently in the animal kingdom.

One mantis can be seen standing before his counterpart near Sauw's home in Tangerang located in the Province of Banten, Indonesia - holding a white flower out for his lover.

The 34-year-old photographer captured the stunning macro images at a bush near his home, which was apparently teaming with the long-legged creatures.

In another of the photographs the female can be see bowing down to the mantis holding the flower, while another one of the creepy-crawly friends has joined them on the branch.

Although Sauw added the floral element to the images for 'romantic effect' after he snapped the intimate moments between the insects, the series of pictures still gives an insight into the curious customs of these creatures.