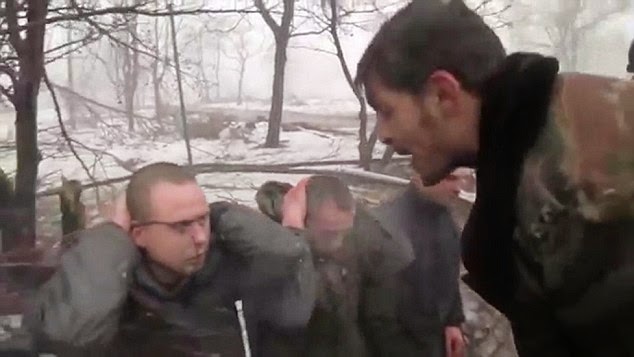 A shocking video has emerged which appears to show a pro-Russian rebel commander force-feeding captured Ukrainian soldiers their own uniforms.

It shows four frightened men in military fatigues kneeling while another man known simply as 'Givi' stands over them.

The aggressor who is thought to be a separatist fighter from the 'Somalia' group pulls out a large, shining knife and cuts the badges from their uniforms.

He then aggressively thrusts it down their throats and demands they begin chewing. The terrified men comply immediately.

The alleged rebel fighter says: 'Why have you come here? Who called you to kill our people and destroy our homes?

'Do you know me? I'm Givi! I grew up here, this is my land, but I will come to you, so that you too know what this is, that this is hell.'

The video suggests the Ukrainian soldiers had been captured in Donetsk International Airport.
Separatists claimed today they had pushed government troops out of two districts outside their main stronghold of Donetsk.