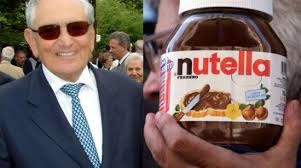 MONTE CARLO - Michele Ferrero, the founder and patriarch of the Italian Nutella and Ferrero Rocher empire, passed away on Valentine's Day.

The 89-year-old died surrounded by his family after suffering from illness for several months.

He was "the richest candyman on the planet," according to Forbes.

Ferrero's father, a small-time pastry maker named Pietro Ferrero, was the one who laid the groundwork for the Nutella recipe.

Ferrero and his family are estimated by Forbes to hold Italy's biggest fortune at $US23.4 billion ($A30.2 billion), making him the 30th richest man in the world.