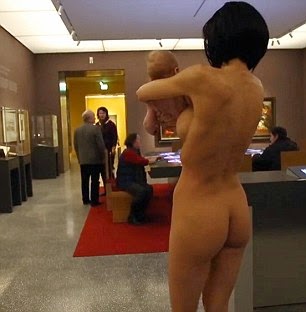 A Swiss artist who made headlines last year by pushing paint-filled eggs out of her vagina has caused another stir by walking around a museum starkers while carrying a baby.

Red-faced visitors including many children were left stunned as brunette Milo Moire, 32, sauntered around the LWL Museum for Art and Culture in the town of Munster in northwest Germany as part of her Naked Life exhibition, which sees her stripping off to express her art.

The artist was slated last year by critics as 'absurd, gratuitous, trite and desperate' for her Plop-Egg exhibition.

Her website however described her work as 'volcanic explosions of colour from her vagina', and now she has been filmed holding the naked baby while looking at paintings of nudes. 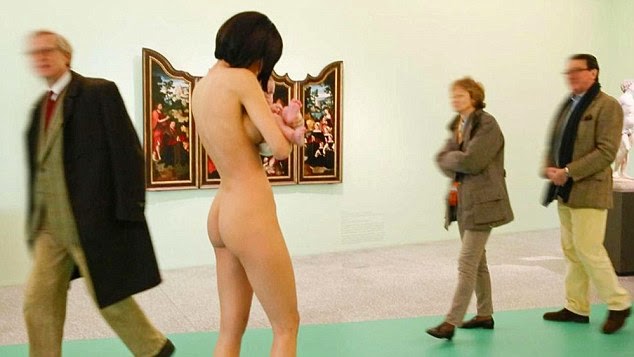 But other museum visitors were left unimpressed. Anke Lange, 30, said: 'I'm all for expression and alternatives in art, but this was just ridiculous.

'From what I gather, she thinks that getting her clothes off, looking at paintings of nude people and holding a naked baby makes her become part of the art.'

Moire said she wanted to show 'A naked infant safe in the arms of a naked woman' at the exhibition which which features works from British artists Francis Bacon, Lucian Freud and David Hockney. 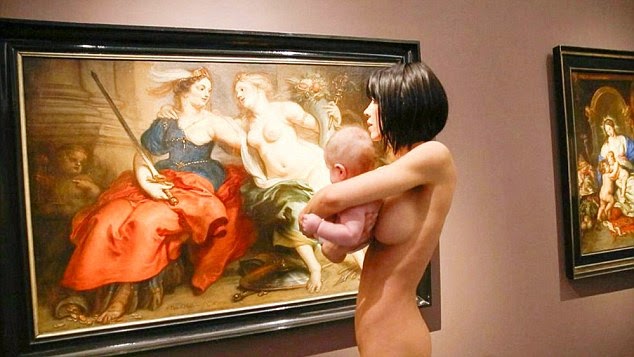 'This direct confrontation with live nude art challenges others to reflect on familiar forms of perception.

'How close may a form of representation in art approach real life?'