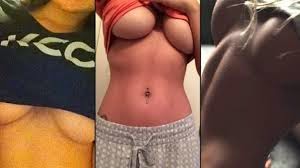 Thailand's government has warned women they face up to five years in prison for taking so-called 'underboob selfies' after the trend swept social media.

The practice of photographing the lower half of one's breasts and posting the images online has become an increasingly popular pastime in the south east Asian country.

But Thailand's military government today said it would be willing to prosecute anybody posting underboob selfies online, claiming the practice is 'inappropriate' and will lead to prosecutions under the country's strict computer crime laws.

Thailand's 2007 Computer Crimes Act bans any material that causes 'damage to the country's security or causes public panic' or 'any obscene computer data which is accessible to the public'.

The culture ministry said offenders faced up to five years in jail, but did not say how they would identify the culprits.

'When people take these 'underboob selfies' no one can see their faces,' ministry spokesman Anandha Chouchoti told Reuters.

'So it's like, we don't know who these belong to, and it encourages others to do the same.

'We can only warn people to not take it up. They are inappropriate actions.'

The ministry has long been criticized for being overzealous in its censorship of films, music, television and some Western cultural practices in an attempt to preserve traditional values of a country that is also infamous of its raunchy night life.