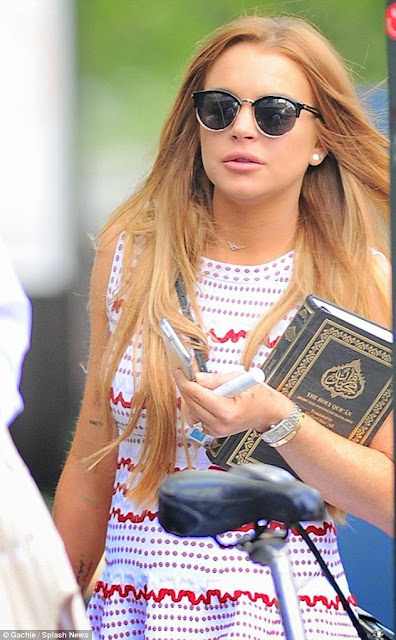 Lindsay Lohan was photographed carrying a copy of the Quran as she stepped out in Brooklyn, New York, on Wednesday.

The actress - who is of Irish and Italian heritage and was raised as a Catholic - held a blue hard copy of the Muslim holy book close to her chest with its gold embossed cover and title clearly visible.

It's an English translation of the original Arabic that the 28-year-old is presumably reading and a blue ribbon appeared to mark the place she is at in the religious text.

It's not the first time Lindsay has shown that she has an interest in other religions.

She revealed to Oprah Winfrey on her docuseries last year that she is a very 'spiritual person' and is rumored to have attended Kabbalah classes in the past.

She said at the time: 'I'm a very spiritual person and I've become more spiritual as time has gone on.'

Adding: 'I'm really in touch, whether it's prayer or meditation... there are so many powers greater than me in the world. I've been blessed and lucky enough to have been given a gift to share with other people.' 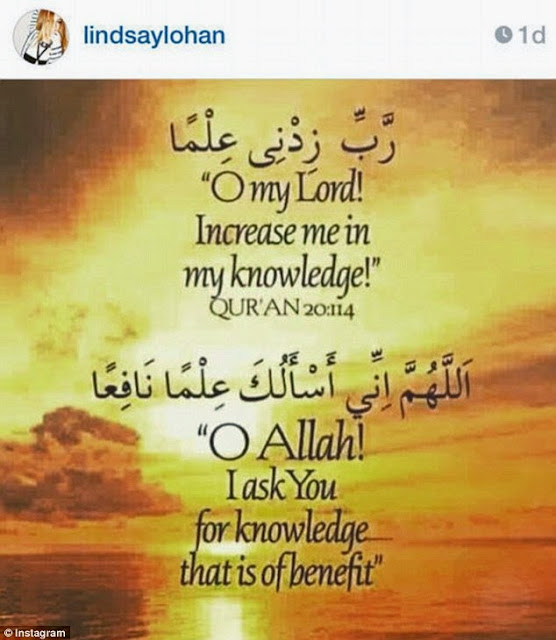 During the height of her fame as a teen star, Lindsay was often pictured wearing a Kabbalah red string bracelet, which is said to ward off misfortune brought about by the 'evil eye'.

In 2012, Courtney Love claimed to Access Hollywood Live that Lindsay had joined her Buddhist chanting group, and was coming round her house with seven other women to chant.

'It's good for her,' Courtney said at the time.

Lindsay was in Brooklyn to start her court-ordered community service at the Duffield Children's Center in the Fort Greene neighborhood.

She snuck in the back door of the community center Wednesday morning to avoid the reporters and fans who'd gathered to catch a glimpse of the troubled star.

She later tweeted a photo of herself with a little boy Donovan, five, whom she first met at the same center in April 2014 while filming her docuseries with Oprah.