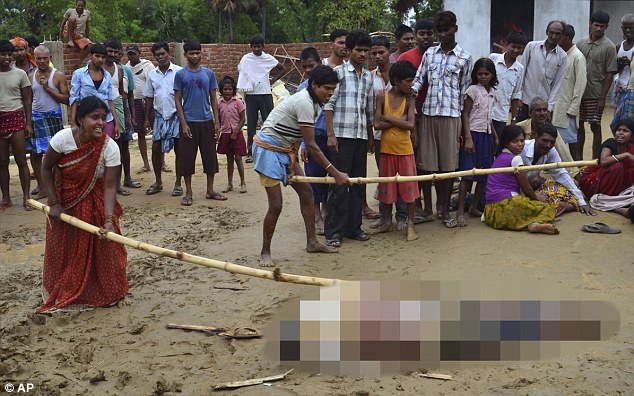 An angry mob in northern India has beaten a school director to death after claiming the facility's staff were responsible for killing two students aged 10 and 11.

Shocking footage broadcast on local TV stations showed the man being beaten with sticks and writhing on the ground as others watched and stomped on his chest, stomach and limbs.

The students had disappeared a day earlier from the school grounds, and villagers accused school staff of killing them and dumping them in a pond.

Post-mortem examinations later showed the boys had drowned, while the school director died from his injuries on Sunday night.

When police arrived at the scene of the lynching, the enraged mob pelted them with stones, injuring six officers, while police also suspended an officer for failing to stop the attack.

Residents of the director's home village held angry protests after the man's death, blocking road and train traffic and setting a vehicle on fire.

The breakout of violence occurred in Nirpur village, about 55miles (90km) southeast of Patna, the capital of Bihar state, and police have vowed to investigate.

Despite authorities' attempts to crack down on vigilante justice, there have been several reports of lynchings throughout India in recent months.

In March, Indian police charged 42 people after the killing and lynching of a rape suspect who was dragged from his prison cell.

Police charged the men with rioting, arson and unlawful assembly over the widely-condemned attack by a frenzied mob on Syed Farid Khan in northeastern Nagaland state.

Thousands of people stormed the Dimapur Central Prison on Thursday to snatch Khan, stripping him naked and beating him to death with sticks in the streets before stringing him up to a clock tower.