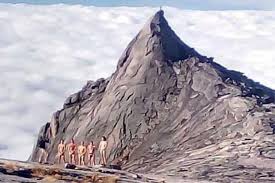 Police have briefly detained and released a foreign tourist associated with a group of tourists accused of stripping naked and urinating on the peak of Mount Kinabalu.

State CID chief Sr Asst Comm II Datuk Sallehuddin Abdul Rahman said, the 38-year-old man, who was planning to leave for the Philippines, was detained in Kota Kinabalu at about 4.20pm today, The Star Online reported.

He added, the man was not part of the 10 wanted foreigners against whom a report was lodged by Sabah Parks officials but a larger group of 27 people who scaled the mountain on May 30.

The case is being investigated under Section 290 of the Penal Code for public nuisance, which carries a fine of up to RM400.

Their photos, which were later posted on the Internet, had received the ire of communities in Sabah, especially those in Kundasang as their actions went against the local culture and traditions.

State Tourism, Culture and Environment Minister Datuk Seri Masidi Manjun said, many speculated that the tourists' behaviour had caused the earthquake in Ranau.

The 6.0-magnitude quake struck at 7.15am on Friday, June 5, sending tremors to the west coast of the state including Tambunan, Tuaran, Pedalaman, Kota Kinabalu and Kota Belud.

According to the National Earthquake and Tsunami Centre, the earthquake was centred 16km northwest of Ranau.