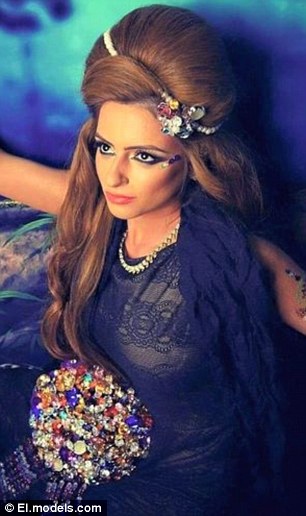 A Muslim model who hanged herself feared she would be forced into an arranged marriage by her parents - whom she later learned were actually her aunt and uncle, an inquest was told.

She took out a forced marriage protection order at a family court in Manchester last December which shielded her against Mr Hussain, 60, Miss Kousar, 55, and her immediate family.

But in May Miss Menaz was found hanged in her bedroom at home - and today, a coroner recorded a verdict of ‘taking her own life while suffering from a depressive illness’.

The inquest in Heywood was told Miss Menaz struggled to deal with ‘traumatic experiences in her childhood’ including being sexually abused, which she dealt with by self harming.

She had a ‘very strained’ relationship with her family, and after leaving home at 16, she met 24-year-old Mr Rassol in 2010 before marrying him in an Islamic ceremony a year later.

The couple had a daughter, who is now three, but the marriage was never confirmed under English law - and her Muslim family did not approve of her relationship, the inquest heard.

Miss Menaz feared they would force her into an arranged marriage, so in December last year took out a forced marriage protection order at the Family Court in Manchester.

But the inquest was told how in subsequent months she was allegedly assaulted by her brother and feared to leave the house, leading to her having psychiatric treatment at Royal Oldham Hospital.