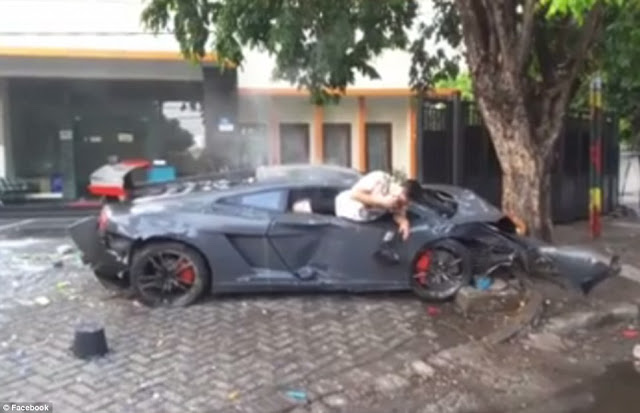 Footage has emerged showing a 24-year-old driver texting while hanging out of the window of his wrecked Lamborghini just moments after he allegedly mowed down three people - killing one.

Wiyang Lautner was detained after he allegedly lost control of his supercar while racing against a Ferrari and hit a middle-aged couple and a street vendor waiter in Surabaya, East Java.

He crashed into Mujianto, 44, Srikanti, 41, and her husband 51-year-old Kuswanto whose body was dragged along by the Lamborghini for several metres before it smashed into a tree, police said.

Onlookers filmed the aftermath of the fatal crash and footage shows the 24-year-old driver texting and speaking on his mobile as he attempted to climb out of the wrecked car.