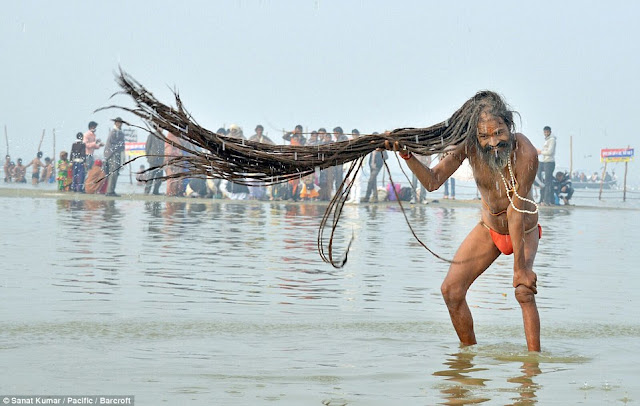 Out of the thousands of Hindus gathered at the banks of northern India's Triveni Sangam, just outside of the city of Allahabad, one man stood out.

The Sadhu, or holy man, swung his ten-foot-long dreads through the air like heavy chains as he stood knee-deep in the cold river water wearing nothing but a pair of saffron briefs.

His dramatic display is part of the holy dip of Magh Mela, a lengthy festival with more than 1,000 years of history that celebrates the beginning of the universe and the holy site.

The festival takes place each year in the month of Magh, as dictated by the Hindu astrological calendar.

This year, the festival began on January 15 and will continue until March 7.

The length of the festival fluctuates between 40 to 50 days, centred around six different auspicious dates as divined by the priests according to the cycle of the moon.

On those auspicious dates, the Hindu devotees will bathe in the river in droves at sun rise to cleanse themselves of their sins.

For some Hindus, it's not only a way to get rid of sin but it will also help them escape karma and be reunited with their supreme soul.

The location is important.

Triveni Sangam is the confluence point of three holy rivers - the Ganges, Yamuna and the mythical, and invisible, river of Saraswati.