Home » Dunia » Gays Should Be Killed

Gays Should Be Killed 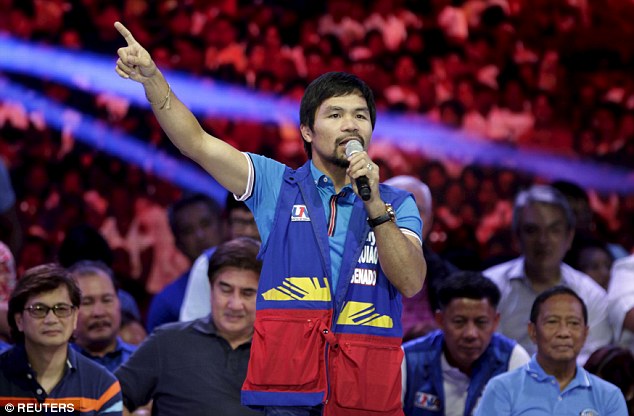 Manny Pacquiao has found himself at the center of fresh controversy after posting a Bible verse saying homosexual men should be killed.

The post on the boxer's Instagram page appeared on Thursday, just hours after he issued a groveling apology for saying gay people were 'worse than animals' - which led to him being dropped by sponsor Nike.

Written alongside a since-deleted picture showing Pacquiao with wife Jinkee, he quotes Leviticus, saying: 'Do not have sexual relations with a man as one does with a woman; that is detestable.

'If a man has sexual relations with a man as one does with a woman, both of them have done what is detestable. They are to be put to death; their blood will be on their own heads.'

The post attracted more than 18,000 likes before being deleted around 3am (EST) on Thursday, according to ABS CBN News.

Asked about his views on gay people, he said: 'It's common sense. Do you see animals mating with the same sex?

'Animals are better because they can distinguish male from female. If men mate with men and women mate with women they are worse than animals.'

However, he apologized for his controversial opinions, though he reiterated his anti-gay views.

'I still stand on my belief that I'm against same sex marriage because of what The Bible says, but I'm not condemning LGBT.