I Do Not Have 10 Inch Penis 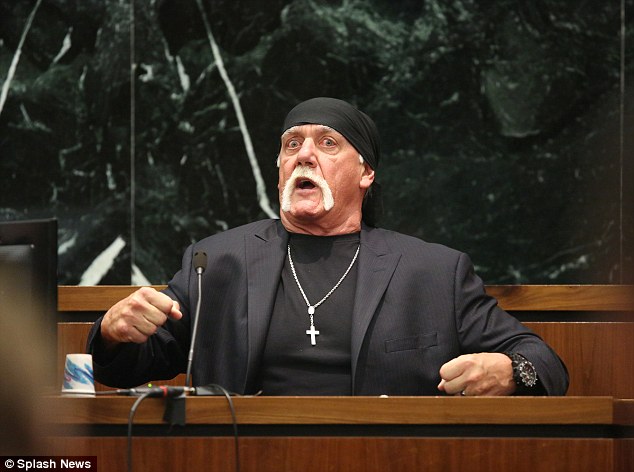 The fight between Hulk Hogan and the Gawker website returned to a Florida courtroom on Tuesday, where the former star wrestler faced questions from lawyers for the media company that he seeks to punish for releasing a secretly recorded sex tape.

Hogan also got to talking about the size of his manhood in a bizarre line of questioning during his cross examination by Gawker attorneys.

A radio interview was played in which he seemed to suggest his penis was 10 inches.

When asked if he had been discussing his penis in that interview, Hogan said; 'Well, it’s not mine, because mine is not the size we’re discussing.'

He was then pressed further by the lawyer, at which point he said; 'No, seriously. I do not have a 10-inch penis.'

Hogan explained his comments in the radio show by saying he was playing the Hulk Hogan character, and was not speaking as his actual self, Terry Bollea.

'Because Terry Bollea’s penis is not 10 inches, like you’re trying to say,' said Hogan.

Hogan, who is seeking $100 million in damages for invasion of his privacy, also testified that he exaggerated about his sex life in an interview as part of his over-the-top wrestling persona.

But Gawker's lawyers have contended he made his sex life a public matter, including the interview.

A six-person jury is hearing the suit against Gawker for publishing an edited one-minute, 41-second sex clip in a case that will test the boundaries between celebrity privacy rights and press freedoms.

Hogan, 62, who is using his legal name of Bollea in court, was cross-examined by Gawker attorneys a day after testifying to his humiliation over the 2012 video posting.

'I am not the same person I was before all this craziness happened,' testified Hogan Tuesday, who was one of the wrestling world's biggest attractions in the 1980s and '90s.

The video was posted on Gawker in 2012, about five years after it was recorded.

It was made without his knowledge, Hogan said, and its revelation showed his betrayal by a trusted friend.

Hogan said on Tuesday that regardless of his celebrity, Gawker crossed a line when it posted the video.

'My problem is this whole videotape that you guys put out that lives forever,' a weary-looking Hogan, wearing a signature black bandanna, said under cross-examination.

'It will be there forever on the Internet.'