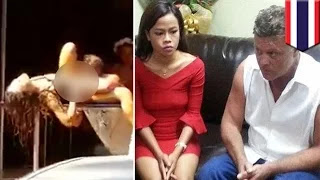 A U.S. citizen has been arrested after allegedly performing a sex act outside a bar in front of dozens of revellers.

Ben Bartanyi, 49, is accused of carrying out the intimate act on a 20-year-old bar worker during a night out in Pattaya, Thailand, on Friday.

Shocking footage appears to show a man walking up to the woman, who appears to be lying on a metal bar, before engaging in the act.