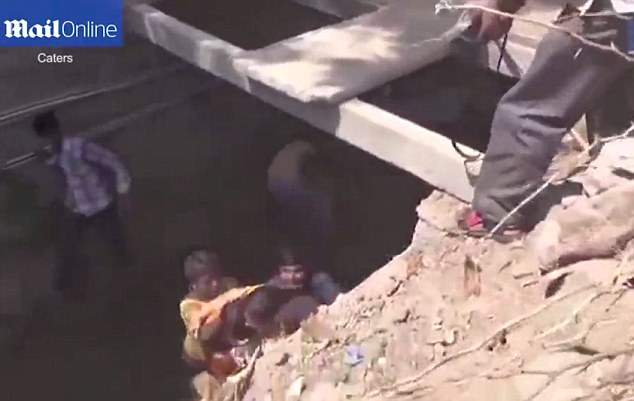 This is the shocking moment an Indian MP falls into a sewer while giving a TV interview.

The unfortunately named Poonam Madam, 40, was speaking to locals in Vododara city of Gujarat when the road caved in.

Madam and four other people standing next to her plunged into the eight-foot deep sewer running underneath.

She suffered a four-inch gash on her head plus injuries to her shoulder and legs.

Two other people were also reported injured in the accident.

A spokesman for Sir HN Reliance Foundation Hospital in Mumbai said: 'A team of doctors attended to her immediately and administered stitches and further treatment.

'She has hurt her left shoulder but has not sustained a fracture.

'All in all, her condition is stable, her vitals normal, and she is conscious and there is nothing to worry about.'

The sewer was covered by a loosely fit, thin concrete layer.